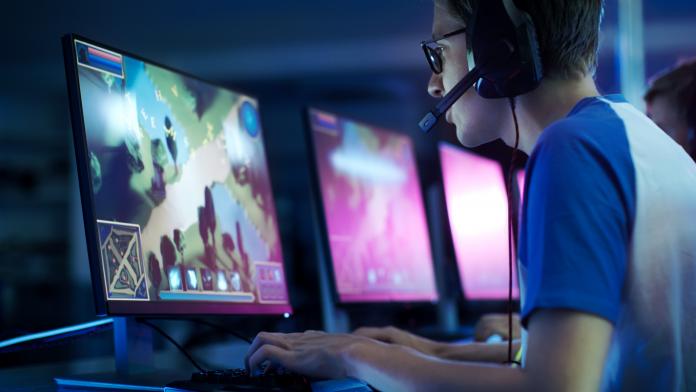 When I think back to how small the gaming industry used to be, all I can think of is Super Mario, which we all played on a 16-bit console. Where are we right now? Gods Unchained, Crypto Kitties, Decentraland, The Last Will, and more! As technology moves faster and faster, the gaming industry goes from being just for fun to being a way to make money.

Blockchain: The Next Big Thing in Gaming!

Since a few years ago, blockchain games are everywhere. In particular, there has been a huge rise in the number of blockchain games released in the past few years. Businesses that want to make games that don’t need a central server can now use this technology. Not only that, but the market for games is expected to grow by 125.65 billion dollars from 2020 to 2025. What’s making this growth happen? How does blockchain change the gaming business? It’s important to know!

The concept of Blockchain Gaming

The gaming industry is always looking for new ways to make money, and with blockchain development services on its side, we can only see changes. From ownership to royalties, from finding rare items to getting trinkets, this technology is going to help the 3 billion gamers around the world in a lot of ways. So, what is gaming on the blockchain?

Blockchain gaming uses blockchain technology to make sure that everyone, not just one entity, owns a copy of what they are playing. To do this, we’ll need a Smart Contract, which is a set of rules for how things work on the blockchain. Blockchain gaming uses the same technology as cryptocurrencies like Bitcoin and Ethereum to make sure that players really own the items they buy. Gamers who often get stuck with things in the game see it as a good thing.

Blockchain technology for gaming lets players customize their items, build their characters, and give them their own style. They can also give them to other users and trade them on the platform. Because of this one-of-a-kind feature, people tend to play blockchain games because they can own the game assets while playing on their own.

Gamers are also likely to be interested in blockchain. This trend is shown by the fact that many rare and valuable NFTs are traded in the gaming industry. Blockchain will be an important part of financial technologies in the future. More people are talking about unchangeable ledgers than just in the context of bitcoin. Blockchain technology is important for running a decentralised banking system, so developers can use it to add user-friendly features to their games.

Here are some Market trends that are driving this Adoption:

Blockchain technology is being added to gaming systems to make peer-to-peer transactions easier and allow players to trade virtual assets in-game. Companies and console makers are getting on board with this change. Microsoft just recently said that it wants to add blockchain to Xbox.

Using blockchain will make it easier for developers to make money from their gaming services and set up payment networks that are fast and safe. A second factor is that gaming companies will have a lot of chances to grow during the forecast period.

NFTs give gamers the chance to really own the digital items they buy. Players can regulate and control their items by getting rid of middlemen like other players.

Virtual events and tournaments are an important part of the gaming business. Tracking and verifying the winners of competitions can be made easier with blockchain technology, which can also help with many other tasks. Also, blockchain games make it easy for gamers to get the most out of them because transactions between users are decentralised and safe, and data can be tracked automatically from any network.

Another thing that is making the market share of games grow. Cloud gaming technologies now make it possible to stream video games online. It is growing even more thanks to mobile games and social media. The price structure of cloud gaming makes it possible for people who don’t play games all the time to play games on social media and mobile devices. A platform in the cloud is used to store and stream games. So, PCs can access it with less space and power to store and process data. Cloud gaming gets rid of the need for high-end graphics cards and PC upgrades, and you can play on any device.

By the end of this year, there will be 1.3 billion PC gamers, 0.8 billion console gamers, and 2.5 billion mobile gamers around the world.

How can Blockchain Services help change the Gaming business?

Blockchain’s decentralised system is the best way to keep hackers from getting to your data. Hackers can’t break the algorithm because this system is made up of blocks, and each block has different information. It also makes developers and entrepreneurs more productive by giving them a safe, secure place to work.

Safe Platforms and Resources for Trading

With blockchain technology, game developers and gamers can make games and apps with lots of resources, earn rewards in games, and upgrade versions of games. Players can also buy and sell things in the game. People can trade their items and money to make money. Since Blockchain keeps track of who owns each item, it is impossible to steal or copy them.

To make a gaming profile, you need to be able to use the features of the gaming platform. Through a central network, blockchain technology makes it possible to play different games. Users can make a single profile that they can use on all platforms. This makes it easier to find games and buy things.

Blockchain development consulting makes it easier, safer, and more open for users to access digital assets and make digital transactions. Blockchain technology gives gamers more control over their games. Players can get games from a variety of places and in different versions without having to change how they play. This trend has been helped by the fact that players can make their own characters, write their own stories, and even play.

Estimation of the value of Intangible Assets

When players finish quests and missions, they can get cryptocurrency as a reward. On the other hand, traditional games give players points that have no real-world value. Players can use the cryptocurrency they earn to buy things from other players or e-commerce sites. People can also trade items in these games. Since blockchain keeps track of every item and who owns it, players can stop copying or stealing.

Even if it sounds great, it still needs a lot of tweaking. These platforms have to find a good balance between what can be bought, how they can work together, security, and being able to keep going. That’s not an easy job.

admin - November 2, 2022
You can directly contact Amazon HR (Human Resources) Department at (888) 892-7180 and ask any queries about your job by calling the Employment Resource...

Reasons to Visit an Aesthetic Clinic in 2022

How To Become An Instagram Influencer – 6 Pro Tips For...

How does Customer Revenue intelligence Generate Sales for our Business?

The Role Of Family Offices In The Future Of Wealth Management