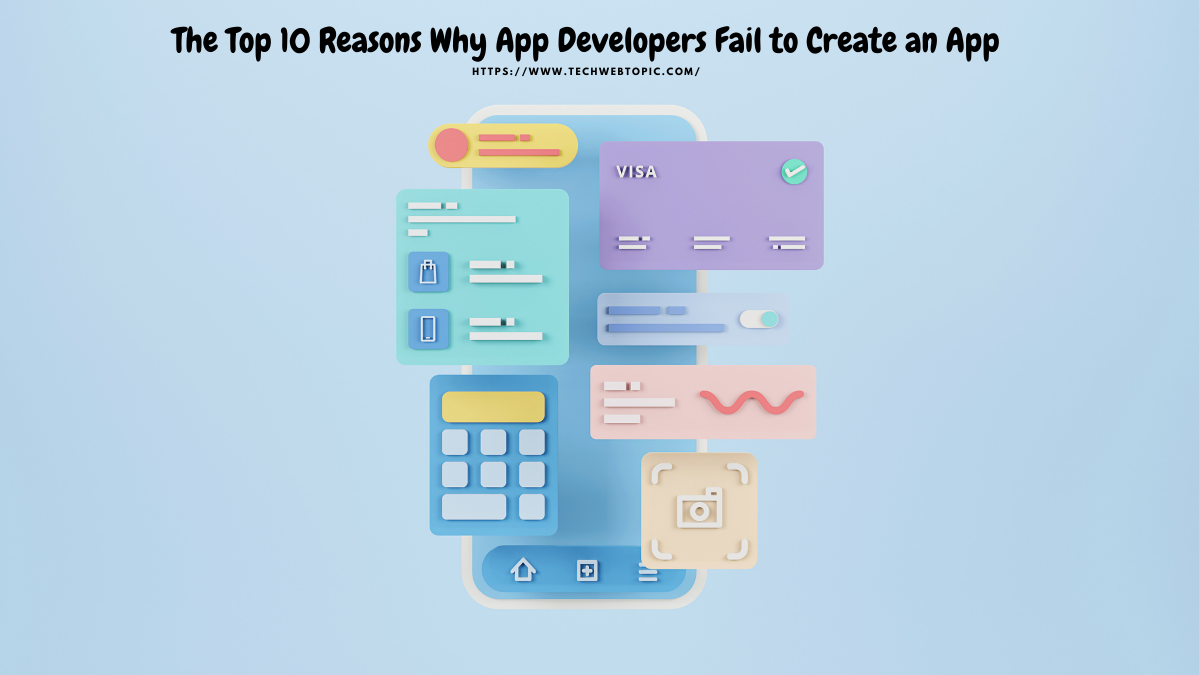 App development shouldn’t be taken lightly. It takes time, dedication, and resources to create an app that’s beneficial to customers and your bottom line alike, so if you’re considering getting into the app creation business, make sure you do it right. Don’t let these 10 reasons why app developers fail to create an app stand in your way! From not knowing how much their app will cost to not understanding what differentiates an app from a mobile website, these reasons demonstrate why developing an app might not be right for your business. Just follow these steps to create an app –How to create ab app

1) Not knowing what users want

The reason why app developers fail is that they never bothered to ask their users what they want. You’ve got a great idea, but nobody cares about your idea if you haven’t tested it with real people. Find out what customers care about and deliver that -not- your idea of what users need or want.

It’s vital that your app is compatible with as many platforms as possible. But even if you do manage to build a successful app on one platform, don’t stop there; work hard at making it accessible and attractive for users on other mobile devices too. If you target only iPhone owners, for example, but neglect those who own Androids or Windows Phones, you’re doing yourself a disservice.

App development is a costly endeavor, and a majority of people don’t want to pay up-front for something they’re not sure they’ll use. If you want your app developed professionally, be prepared to shell out some cash—upwards of $50,000 or more. While cost should never be your number one concern when starting a business, it’s important that you have sufficient capital for an efficient start.

4) Lack of support from other people in business

The most successful entrepreneurs have mentors. These are people who will listen to their ideas, critique them, and give suggestions on how they could be implemented. The best mentors offer both positive and negative feedback; in order for your business idea to thrive, it needs both kinds of input. The need for your product or service might not exist at all: Before you start developing your app make sure that people want it, are willing to pay for it and that there is a market for your idea.

5) Not Knowing how to market your application

Your application can be one of a kind and have ground-breaking features. However, if you do not know how to promote it, your app will stay buried in some dark corner of iTunes. As such, you should learn about successful marketing strategies before developing your app. Otherwise, even if people use your application they will not know that it exists because you did not plan ahead properly. In order to get publicity and users for your app, make sure that you follow these tips.

6) Not being able to meet deadlines

When it comes to development, there’s nothing more important than being able to meet deadlines. This can be a major pitfall for app developers because everyone has a different definition of what on time means. If you don’t set up clear and realistic deadlines, issues with meeting them are inevitable. And no matter how strong your work ethic is, sometimes things just can’t get done within a certain timeframe.

7) Being spread too thin

Too many ideas and not enough execution. Releasing too early: Missing details, incomplete support, or a feature that doesn’t work as it should all make for angry users and can significantly hurt your app’s image. Greed: If you want to develop apps for money, go learn more about developing businesses, because your mindset is all wrong from day one. Ignoring potential partners: An app has no value if it doesn’t have users—whether they’re paying or not.

8) Doing everything on your own

One of the major reasons why app developers fail is that they’re trying to do everything on their own. This can include everything from designing and developing your app, marketing it and so much more. While you may be able to handle some aspects of development yourself, having professional help with design (and especially marketing) will dramatically increase your chances of success. If you really want to make it on mobile, don’t try doing it all yourself!

It’s not enough to have a great idea for a mobile app, or even a working app. Any project—app-related or otherwise—needs to be thoroughly planned out before you get started. For example, take into account things like: How much time do you expect it will take you (and/or your team) to build it? What are your potential competitors doing? Who are your target users, and what kinds of apps do they use most often?

10) Too many tools used at once

Have you ever heard of cramming for a test? Cramming is one of those things that only works when it’s utilized infrequently, if at all. When we try to learn everything at once, our brains shut down and are unable to retain information. Instead of trying to do everything at once, focus on just one new thing at a time. When you’re comfortable with that, add another thing until you have all your shiny new tools under your belt.

Developing an app for an idea is not easy but if we do with follow well designed industrial steps then it’s not as hard as we think to develop an app.

Techwebtopic
Today, healthcare provision is patient-centered, thanks to the rapid evolution that has been seen in the 21st century. Technological advancements have been at the...

Five Ways To Improve Technical Support Service Of Your Business

How to Install Android Emulator on Windows PC

What are the Benefits of working with a medical device marketing...