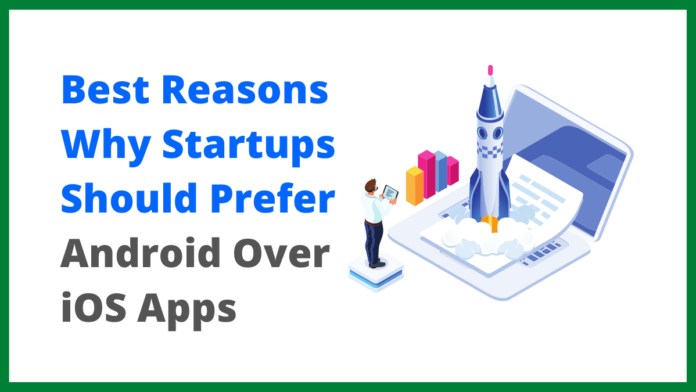 When we talk about startups, it is totally a different topic. You usually look for efficient products from mobile app development services.

Want to choose Android or iOS, Android is the best option when it comes to meeting both technological and financial requirements. There are a variety of options available when you talk about Android and iOS.

In this post, we will be discussing some key pointers of Android and iOS and let you decide which OS suits best for your startups.

Reasons Why Startups Should Prefer Android Over iOS Apps

There are plenty of reasons why startups should choose Android over iOS. Some of the top reasons are:

Big giants like Samsung, Sony, MI, Motorola, and many other manufacturers introduce the latest Android devices every year with plenty of features. On the other hand, if we talk about iOS, when a new iPhone is introduced in the market, which comes with the latest iOS and features, the older version gets outdated.

This denotes that Apple has limited devices compared to Android in the current market.

Thus, the omnipresence of Android devices is one of the biggest success when we talk about popularity in the current market.

Another benefit of Android OS is the affordability of devices. If a business person wants to implement the BYOD concept to avail all the benefits of mobility by hiring an android app development company.

Read :   5 Ways A No-Code App Builder Can Help You

Comparing Android with iOS is comparatively expensive and can prevent companies from buying Apple devices in bulk.

When we talk about Apple, it has homogeneous hardware and software and has limited options, whereas Android can be customized according to your choice and the way you want.

Hiring an Android app development agency can customize your app according to your business requirements.

One of the biggest strengths of Android is its widgets. Widgets has gained a good name in the Android market globally.

On the other hand, if we talk about iOS, it shows static rows of icons. Users can have a glance at their home screen without opening an app.

As Android widgets are growing rapidly, Apple is coming up with widgets. But these widgets are limited in iOS and are active in the notification area only.

There is a huge debate between Android and iOS about multitasking. Most Apple users argue that iOS can provide better multitasking than Android.

But wait? Do you know that Android has better and more robust multitasking features?

Let us talk about Samsung; and earlier, they have introduced windows, where users can see all their recently used apps.

No doubt, Apple has worked and introduced these features, but Android Stock features will take multitasking features to the next level.

The built-in software from Android devices can easily be replaced by the developers with the help of custom ROMs (Read-Only-Memory).

When we talk about Android, it gives us two benefits:

Customization and performance are the key benefits of custom ROM, and they give huge advantages over iPhones.

Concluding the post, we can say that both Android and iOS have a huge customer base, and both of them provide ample features to their customers.

In today’s market, Android provides more compatibility and features, and most importantly, it is cost-effective compared to iOS. Thus most businesses prefer Android over iOS apps.

If you are a business person thinking of developing customized android apps for your business, you can avail custom android app development services from any development company.

6 Technology Modules to Look Out for In a Hotel PMS

admin
With the substantial challenges of the COVID-19 pandemic shaking the hotel industry to its core, it has become clear that hotels need a sturdy...

Role of Information Technology in Education

5 Benefits Of Automating Your Finances

Top 5 B2B WooCommerce plugins to watch for in 2022

4 Things You Need to Avoid When Writing an RFP

How to Reduce PSD File Size without Sacrificing Quality