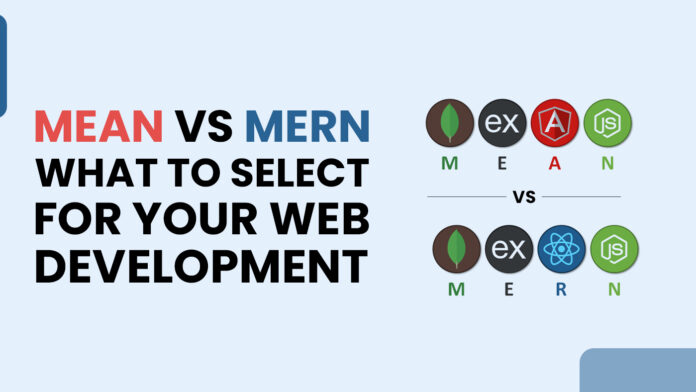 The advent of the internet brings one unavoidable reality that cannot be ignored. That is the presence on various websites. Yes! If you’re looking to expand the number of customers you serve and to see an increase in the size of your London Web design company, you must extend the boundaries. The first way to do this is to create a reliable and effective website or application that serves your business promptly. Therefore, finding someone who can develop a website, a mobile application or an e-commerce platform for you is essential. That’s the services of ‘Full-Stack Development’. So, in this article, we will discuss the main differences between Mean and Mern.

Full Stack for Mobile and Website App Design: Requirement of the Hour:

The present-day website development procedure is complex and requires various strategies and tools to be used at every stage of a website. For the whole creation and design of your website, it is essential to bring on board a complete team of full-stack experts.

In terms of statistics, the world is booming. With 3.5 billion smartphones being used and worldwide e-retail sales projected to hit USD 4.8 trillion in 2021, having a high-quality website to sell your services and products is the necessity of the moment. As for all needs, it is no longer necessary to have static websites gone. The first step of each Millennial or Gen Z person is online surfing and looking. Full-stack development could be the answer you’ve been searching for if you’re looking to expand your enterprise and access that huge pool of potential clients.

MongoDB, Express.JS, Angular and Node.JS are a collection of technologies described by the term MEAN Stack technology in Mobile and Web Applications. Let’s take a look at the specifics that make up this acronym:

As MEAN, MERN also consists of four components that are open source: MongoDB, Express, React, and Node.js. They provide end-to-end framework support to developers. So, let’s look at them in depth:

The Difference between MEAN and MERN:

Before we get into the differences, we’ll highlight the most obvious aspect: the distinction between Angular.JS and React.JS, which separates MEAN from MERN.

Angular.JS is a very popular choice among developers due to its MVC structure, while React.JS, with its well-designed library, helps mean stack developers by providing abstractions on the UI layer, allowing for the optimization of rendering code of the component for creating applications. At the same time, Angular.JS is supported by Google.Inc, React.JS is backed by Facebook. Therefore, the framework and library have implications depending on the program’s requirements.

Although MEAN and MERN offer abstraction at a User Interface (UI) level, certain points distinguish them.

The latest version of Angular.JS is extremely solid and effectively completes the development of the JavaScript-based MVC framework. As a result, the coding process and managing files for front-end development is easier. However, React.JS speeds up the writing process because it is a JavaScript Library. As a result, React.JS is far superior to Angular.JS in performance.

Thus, even though MERN is only recently entering the realm of development, it is likely to show better performance and the speed that applications require. In addition, as time passes, JavaScript has become an interface to the web. With the performance capabilities of MERN’s Library that MERN provides, developers can provide websites with high-quality experiences similar to mobile applications.

LinkedIn, the largest professional social media platform, chose MEAN over MERN to build its enterprise-level software. The reason behind this decision was quite straightforward – Architecture. While this isn’t a fact, MERN helps make UI rendering easy; React.JS is just a library, but Angular.

From an engineer’s perspective, MERN permits the separation of database and UI code by creating an intermediate layer; consequently, it is easier to maintain and update the code. This is where MERN wins the war against MERN regarding architecture. However, MEAN and MERN can be found to have a practical use based on the needed solution.

We’ve made an explicit distinction between the two. Angular.JS can be described as a framework. However, React.JS is an application library. Various third-party libraries must be considered when we think about the development of a massive enterprise application (assuming the creation of a large-scale e-commerce platform such as amazon.com). Since Angular.JS allows “$http” calls to connect the front-end, back-end and library, MEAN functions better as an open-source system for designers.

It is worth mentioning that React.JS is only the name of a library. Therefore, providing other features or creating an enterprise-scale solution will require additional configuration and libraries. In this case, the issue is with MEAN regarding using third-party libraries in conjunction with MERN.

Read :   How Hiring a Remote PHP Web Developer will benefit your Business?

A Streamlined Flow of Development:

With the MVC (Model View Controller) architecture, MEAN doesn’t just make the whole process of creating applications more efficient and secure, but due to the inclusion of the Angular.JS framework, it keeps the development of web applications more organized since libraries are easily integrated. MERN, however, in contrast, is a flexible framework that requires the use of additional libraries than React.JS and frameworks that are used to create the application. Therefore, MEAN assists in avoiding unnecessary work that MERN could require to build an identical application.

A few famous Angular companies include NASA, HBO, Nike and YouTube. On the other hand, the top companies using React include Uber, Dropbox, Instagram, PayPal, Netflix, and Flipkart. MEAN stack is the best option for large-scale applications, while the MERN stack can be a great choice when you need to develop faster for small-scale applications. The final decision depends on the web design company you work with, as they can better comprehend the demands.

The development team at O2SOFT, a Web design company London, has a wealth of experience in stacks. We tackle the issues early and provide top-of-the-line work within the specified times. Before recommending our solution to your project, we consider every aspect of Mern stack vs full stack, like the architecture and maintenance ease and the software’s effectiveness, a well-organized workflow stack performance and agility.

How Hiring a Remote PHP Web Developer will benefit your Business?

admin
Almost every modern-day business leverage analytics in some way or the other. The ability to drive effective decision making and augment the organization's growth...

How to Create a Content Marketing Strategy for eCommerce?

What Impact Will Artificial Intelligence Have on Our Daily Lives in...

Why Should You Buy Products From Electrical Wholesalers?