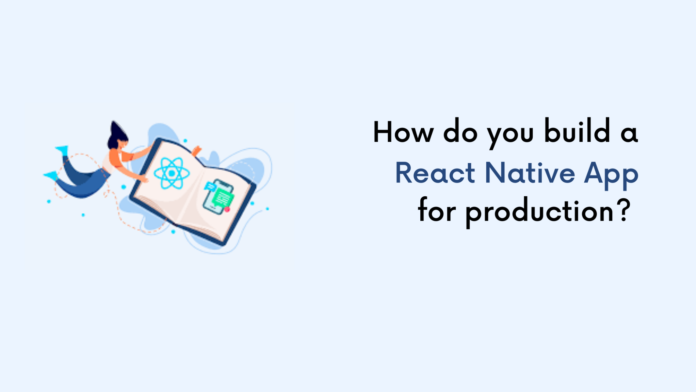 React Native is one of the most popular mobile app development platforms that help the creation of functional apps. The creation of apps for organizations can take three to nine months for production as per its complexities. Getting the production-ready apps means acquiring the best version of the app to be ready for use. The production-ready app is the common term used in mobile app development. The app needs to meet the demands of the business and thus take the help of React Native app development experts for quick assistance.

An app or piece of software is production-ready if it meets the demand of the business or its clients. It includes the ease of usability and availability as per the need. The experts are assessing the criteria in multiple ways, but Agile Teams rely on user stories to validate usability and automate testing for readability validation. The software needs to be available for simple use and the Agile Teams maximize the availability by leveraging the continuous delivery practice.

To start the development of an app using React Native, you need some prerequisites like Android Studio, Android Emulator, an Android device, a text editor, node, npm, and npx.

Creating Developer Version 0.0.1 of the App

The section includes the development of the MVP version of the software and it will be done by rendering the app inside App.js. file. Let us follow the steps –

Import ‘package.json’ to render the version of the app:

Now the React Native app development expert can do the necessary styling of the app as preferred and it will be done.

Build a Production-Ready Version of the App for Android

The building of production-ready apps involves some vital steps and we’ll discuss them in this particular section. You need to be aware of some of the common terms before starting with the development steps. Let us look at them –

Android Keystore System: It allows the storing of cryptographic keys in a container named ‘Keystore’.

Android Keystore: It is the container for authorizing the public key or authorization certificates. These are used by Java-used apps for authentication and encryption.

Debug Keystore: It is the Keystore used for signing an Android Package and is generated for the build tools. The Keystore is assisting to run an app on the emulator connected to the device via a USB.

Android Package: It is the packaged file format used by the Android systems for the installation of mobile apps, games, and middleware.

Signed Apk: It is referred to as the Android package file that holds the private key for developers. The device is not installing the APK that is not signed properly.

Gradle: It is the build system used for the compilation of codes, deployment, testing, and maintenance.

Generation of the Right Release Key

A key tool is used for the generation of release keys and it is advisable to get a relevant tool before the start. Run the command –

Next, enter the key and the password as when asked. Always remember the Keystore file name, alias, Keystore, and passwords for setting up the Gradle variables.

Finally, get the right details like first & last name, location, country code, and others. The Keystore file is placed smoothly inside the project root after generating the project folder.

Gradle is referred to as the build system for compiling, testing, deployment, and other activities. It will require relevant information for the completion of the build.

Supply Gradle with the following keys for the property keys –

Read :   How To Compress PDF Without Losing Original Quality?

It can be done by changing the directory into the Android key as ‘cd android’. Now Run the command ‘./gradlew assembleRelease’ to bundle the application into the apk file.

Test the Release Build of the Software

It is possible to test the build production of the app by running the command – ‘npx react-native run-android –variant=release’. But, the initial need to be related to debugging the software from the device it is running.

Organizations invest heavily in apps to get the best returns. Focusing on small production-ready releases can help the software become competitive. The content above guides you with the building process of a react native app in detail. Reach out to React Native app development experts for the best assistance in building a React Native app for production. Developers need to be aware of the building process before committing to the creation of apps with the relevant platform. Create the right kind of app with help of software developers to boost the business profits.

How to Delete All Types of Unnecessary Files from Windows PC

How to Build a Successful YouTube Channel with TikTok

How does IB PYP aid in the overall growth of young minds?

Best Software and Tools for SMB Going Into 2023

admin - September 17, 2022
Software and digital tools have gone a long way in leveling the playing ground for SMBs. Incorporating appropriate software and tools can help SMBs...

What is Sustainability vs. ESG Communication?

A Complete Guide to Merge Duplicate Accounts in Salesforce