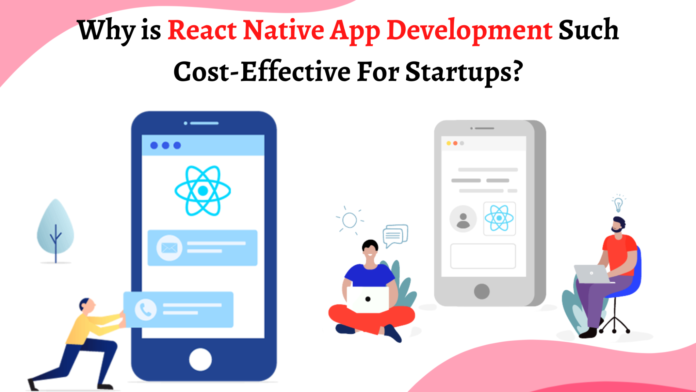 It enables them to develop highly versatile apps for different platforms using a single codebase. According to a developer survey in 2021, React Native is the second most popular cross-platform mobile framework.

So, if you are a startup, the foremost thing you should do is have a mobile app for your business to interact with potential customers. For this purpose, you can take the help of React Native app development company that provides a flawless experience to your target audience.

One of the most significant aspects startups are concerned about is the budget. React Native can assist startups, particularly those with budget limitations, to save on development expenses and time.

A startup can hire a professional React Native developer at cost-efficient rates of $25-$49 per hour. Moreover, selecting the React Native framework means quicker development because of the features of the JSX code.

Read :   What's New in Android 12 and Why Should You Create an App

React Native provides a superior user experience for every device and screen. Furthermore, it presents numerous native-like UI elements to make native-like apps. The asynchronous JavaScript operates in a native environment that facilitates the development of an adaptable and responsive mobile UI with hassle-free interaction.

By using React Native development, you can easily integrate different third-party plugins, making it possible to build feature-packed cross-platform apps quickly. You can hire React Native app developer to add plugins according to your business.

For a successful mobile app development project, the time required for a mobile app to go from the MVP stage to eventually released on various app stores is critical. Reduced app deployment time means a speedier online presence for startups. Moreover, more than 90% of codes are similar for Android and iOS, making it feasible for developers to launch the first mobile application version quickly.

While using React Native, you get the flexibility for any modifications in the code. Developers have to make the changes in codes only once, which will be automatically applied to both platforms, i.e., Android and iOS. However, if you go with native app development, you must change the codes separately for both platforms.

Read :   The Effects of the IoT and Mobile App Dev on UX

7. Accessibility To a Huge Pool of Talented Developers

React Native permits developers to work with different backend technologies like Node.js, Ruby on Rails, Django, ASP.net, and much more.

Using React Native, developers can save time and money by writing code for similar components for two separate platforms. It enables developers to build just one codebase that works on the Android and iOS platforms.

React Native is supported by Facebook and many passionate React Native developers from across the globe. Being open source, one can easily find answers to queries from experienced developers. The vast community of developers is increasing rapidly and working relentlessly on enhancing the framework.

React Native is a powerful cross-platform app development platform having enormous prospects in the arena of mobile applications. It has helped many startups who wish to quickly release their mobile apps into the market but have a limited budget.

Read :   The Comprehensive Guide to Know Everything About MERN Stack

Organizing Your Event: Tips For A Successful One

How to Hire a Flutter Developer – A Complete Guide

Reasons Why You Should Hire A Shopify Expert For Your Online...

AWS Lambda and its Benefits

How to Optimize Your Database for Performance