With solar power becoming increasingly accessible, it’s time to start thinking outside the box and creatively using this sustainable energy source in public places. Public places and solar power are a match made in heaven. Since the current energy consumption by public places is tremendous, it only makes sense to start utilizing this renewable resource wherever possible.

Come along as we explore five of the best ways solar power can be used in public spaces.

Let’s face it, carbon emissions from burning fossil fuels are terrible for the planet, and moreover, they are believed by many to be the leading cause of global warming. Little wonder so many countries and organizations are taking steps to reduce their carbon footprint.

Pew research reports that in 2018, fossil fuels fed about 80% of the nation’s energy demand with transportation accounting for about 28% of total energy use, followed by the industrial sector (23%), households (7%) and commercial establishments (less than 5%). They further reported that “solar generated over 2 billion kilowatt-hours of electricity in 2008. A decade later, it generated more than 93 billion kilowatt-hours, an almost 46-fold increase.”

Being the cleanest and most abundant renewable energy source available, solar energy is certainly the way to go.

5 Ways Solar Power Can Be Used In Public Spaces

Newer trends are focusing on renewable energy sources like solar, wind, and hydropower. As we become more conscious of the environmental impacts of our energy consumption, finding ways to integrate solar power in public spaces is becoming increasingly important.

Read :   How Technology Has Made Travelling Easier

Here are 5 ways solar can be used in public areas:

All across the country, streetlights powered by solar energy are popping up. Solar street lighting systems can provide reliable and cost-effective illumination for roads and highways.

In fact, many cities are now opting for LEDs powered by photovoltaic cells due to their lower energy consumption. While an average street light consumes 25 to 250 watts of electricity, LED streetlights powered by solar only require between 80 to 120  watts of energy.

We’ve all seen benches powered by solar energy, and these benches are designed with solar panels that recharge the battery of devices.

You can count this as especially useful for commuters and travelers in public spaces who need to charge their phones or other devices. Pairing these benches with solar-powered picnic tables in a park can also provide a great outing spot for friends and family.

Solar car parks are a great way to power public areas as they are powered by photovoltaic cells that convert solar energy into electricity.

The generated energy is then used for lighting, charging electric vehicles, or powering other equipment in the car park. 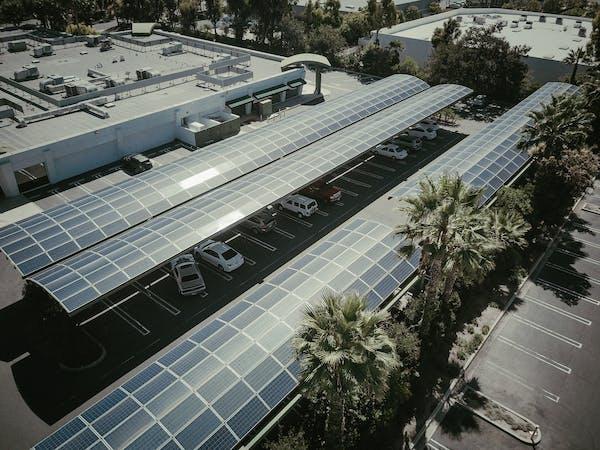 Many of these charging stations run on solar energy, providing travelers and customers an environmentally friendly way to recharge their gadgets while out and about.

Read :   How To Overcome The Challenges Every Massage Center Director Is Facing

Consider this a great way of reducing our carbon footprint while still providing the convenience of charging devices on the go.

These buses typically use photovoltaic cells to capture solar energy which is then used to power the bus’s onboard systems and provide passengers with a comfortable ride.

Solar power is an incredibly important resource that more public facilities need to harness to reduce our carbon footprint and move toward a more sustainable future. We can ensure that our public areas remain clean and energy-efficient by utilizing solar power in public spaces and commercial places.

So the next time you’re out in a public space, take a moment to look around and see how many facilities are using this solar power. Who knows, you may just be standing next to a solar-powered fountain or bus!

5 Ways to Monitor Your Businesses Performance

What is the Importance of Workflow Automation? How Can Your Organization Adopt It?

Questions to Ask Before Hiring a Construction Contractor

How To Overcome The Challenges Every Massage Center Director Is Facing

How Technology Has Made Travelling Easier

admin
Technology changes fast, and web design trends are no different. Globally, 175 new websites are created every minute, making it around 252,000 new websites...

5 Reasons to Trust the Security of Cloud Services for Your...

How to Clear System and Internet Cache on Mac?

How to Get Build A Great Small Business Website?

How To Promote Your Content Through Guest Posting In 2022